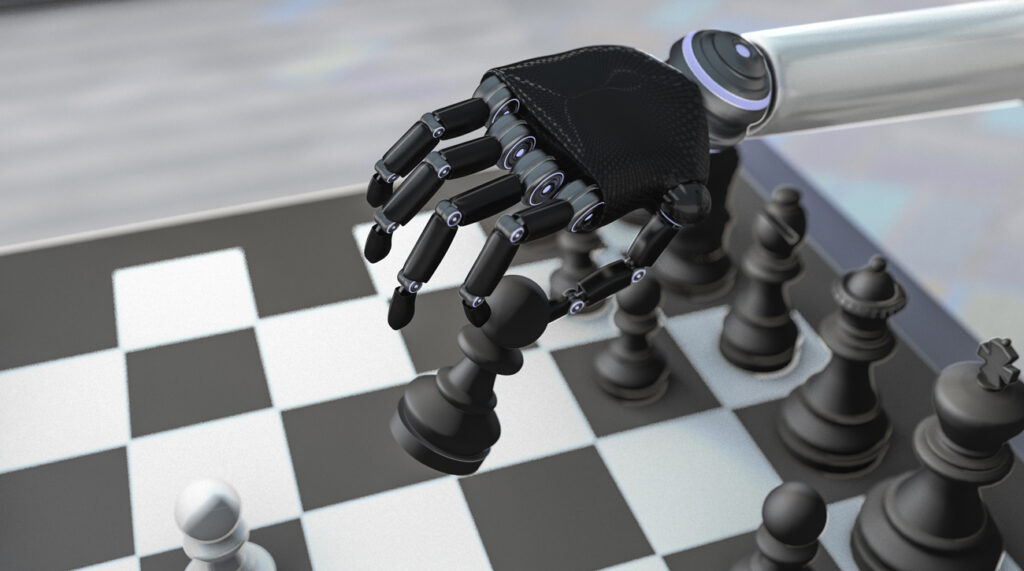 The artificial superintelligence threatening to usurp global dominance is a classic science fiction topos, appearing in literature by authors like Stanislaw Lem (Golem XIV) and films such as 2001: A Space Odyssey. Will a similar scenario soon threaten us in reality? Scientific journalist Ulrich Eberl addressed this question and spoke with leading scientists and technicians in his book Smart Machines. Faced with the latest stage wins by machines over humans, from the humiliated world chess champion to the triumphs of the Google AlphaGo program in the Asian strategy game Go, rapidly growing computing powers and networking of computer systems, self-driving cars, delivery drones, and care robots, this question stands to reason.

Everything can be reproduced by artificial intelligence

Eberl’s first conclusion is sobering: There is no human ability or characteristic that fundamentally can’t be artificially reproduced. This can already be seen in the use of robots in industry, where they produce, sort, measure, or analyze nearly flawlessly – in large quantities or as a unique specimen. One example of an almost completely automated factory is a facility in Ciudad Juárez, Mexico, where the Californian company Align Technology manufactures 80,000 transparent dental splints daily, with no two of them the same. It’s practically the automation of manual labor, but one that can only be accomplished with an enormous use of robots, cutting-edge technology like 3D printers, and consistent digitization of the entire supply chain. Eberl provides even more examples of how robots and intelligent computer systems are used today and what opportunities are thereby opened. For example, the smart home, smart car , and smart grid  will be part of the smart city in the future, as is the case today in the seaside town of Aspern in the 22nd district of Vienna.

Cornerstone of an economic growth strategy

The author is excited by the possibilities of technology, especially when he describes the dancing Honda robot Assimo or his first contact with the Geminoid F, and determines that Japan is resolved to make robots a cornerstone of their economic growth strategy. International firms such as Google and Tesla (USA) or Mercedes-Benz and Kuka (Germany) are also getting in on the act, and developing machines for transport and logistics with self-driving cars, trains, and forklifts. There are also corresponding developments in healthcare: Care and service robots will soon show how machine learning, robotics, and artificial intelligence continue to converge.

Routine jobs are being automated

But where there is much light, there are also many shadows: What tasks and jobs still need people, when nearly every one of their skills can be artificially reproduced? Routine jobs are affected by the wave of automation, whether on the assembly line or in the office, in administration, logistics, or retail. But also tradespeople, bricklayers for example, are being ousted by construction robots, and journalists are being supported by text robots. So, are we on the verge of a new era of mass unemployment? By no means! While routine jobs are disappearing, that also means that the complex and difficult tasks will be reserved for people. Nevertheless, according to the McKinsey Global Institute, smart machines will also change the content and orientation of the work of 110 to 140  million knowledge workers in the next decade. What does this mean for Germany? With today’s technology, roughly twelve percent of workers in Germany – that is, five million people – do work that can be automated.

But does this development also mean that robots and computer systems will outstrip humans on all playing fields of intelligence in the coming decades? Eberl’s answer sounds reassuring: “Smart machines will define our world – but not us.” We will encounter intelligent machines everywhere, they will annihilate jobs and create new ones, they will provide us a helping hand and challenge us intellectually, because they make us ponder who we as human beings are, and what our purpose is. People who succeed in cleverly combining machine learning approaches, artificial intelligence, and robotics will score the jackpot in this development. For this reason, Eberl concludes: “Intelligent machines are a new challenge. But also an opportunity. If we do it right, they will benefit us far more than hurt us.” Ultimately, the human mind has one major advantage over any artificial intelligence: The highest performance supercomputers in the world, Titan in the US and Tianhe-2 in China, require between 8 and 18 megawatts to achieve the storage capacity and computing speed of a human brain, which corresponds to the average energy demand of a city of 20,000 people in Germany. The human brain needs 20 watts to do the same!

Ulrich Eberl is one of Germany’s most renowned scientific and technological journalists. He has a doctorate in biophysics, worked for Daimler, headed Innovation Communications at Siemens for 20 years, and founded the futuristic magazine Pictures of the Future. Blog: zukunft2050.wordpress.com; on Twitter: @UlrichEberl1