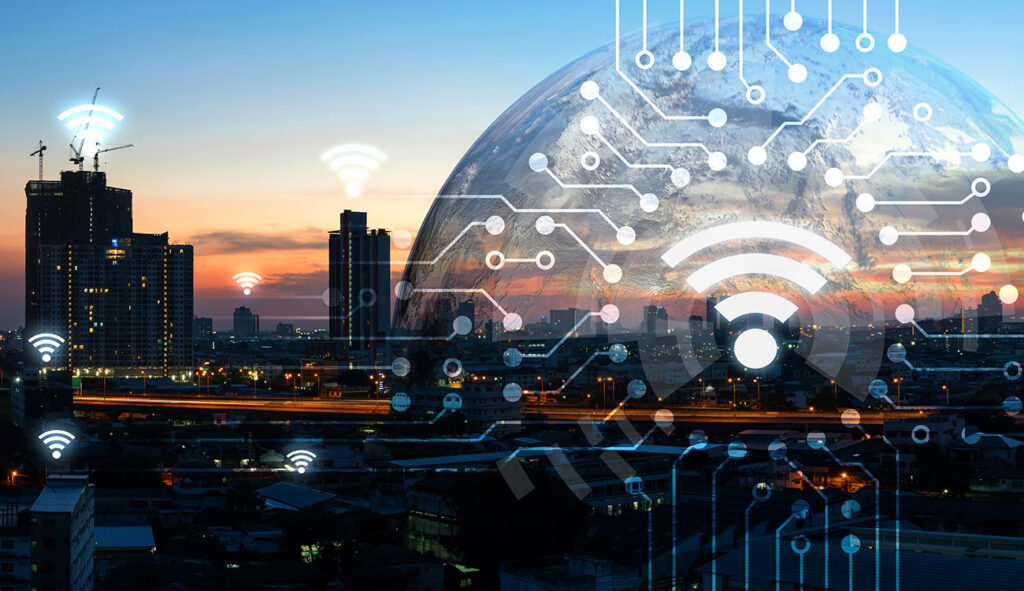 The city with brains
The urban population is growing: By 2030, almost 80 percent of Germans will be living in cities. That presents an enormous challenge for public administration - as well as an amazing opportunity for tapping into the various possibilities of digitization so that we can live together well. Smart City: Digitalisierung in Stadt und Land (Smart City: The Digital Revolution in Urban and Rural Areas) takes the town of Arnsberg as a case study for exploring the future of urban life.

“The transformation of our world is taking place in towns and cities, or at least that is where it is having the greatest impact. So that is where new solutions must be tested and must become established as lived experience.” Hans-Josef Vogel, former Mayor and current District President of Arnsberg, knows what he’s talking about. Nowhere else is this transformation – a radical revolution in all areas of life caused by digitization – as momentous as in towns and cities. That’s why the local authority in the town, which has a population of around 80,000, has set about transforming it into a “smart city” through initiatives such as the “Digital Forum Arnsberg,” the “Digital Agenda” green paper, and other projects relating to the digital school, the smart factory/Industry 4.0, telemedicine, and much more. Together with Karlheinz Weißer, Managing Director of the town’s public utilities, and Professor Wolf D. Hartmann, Scientific Coordinator of the Arnsberg campus, Vogel provides a comprehensive overview in this book of the steps that have already been taken or planned on the journey towards that goal.

What does “smart city” actually mean? The authors emphasize that the all-encompassing digital revolution is linked to terms such as intelligence and sustainability – i.e. everything that makes “our day-to-day lives easier and that brings us into harmony with the climate and the environment. (…) It is almost always the result of a process, through which the urban regions become more efficient, livable, and environmentally friendly.” The advancing connectivity of all citizens and institutions via the internet means that creative processes are increasingly played out between the poles of public administration and individual participation. The smart city’s first goal must therefore be to provide blanket access to the network for all residents. Within the framework of the “Digital Agenda,” Arnsberg is therefore focusing on the acquisition of high-speed broadband, free Wi-Fi in popular spots, and other measures to connect its citizens. Participation requires access, and that is the basis for all further measures taken in the town.

These measures really pack a punch. Because wherever 80,000 people live together, countless challenges will arise each and every day, and solutions must be found. Vogel and his co-authors address traditional city planning task fields such as administration, transport, trade, education, health, homes, and waste disposal. They reveal the steps that have already been taken in the town, and they point to the many possibilities of future digital design media. They do not shy away from developments that still do not feature in the townscape directly – for example when they make clear in their discussion of smart mobility that driverless cars will revolutionize urban transport in future. “75 percent of the public infrastructure our towns and cities will need by 2050 at the latest is still unbuilt,” say the authors. This book is not afraid to think big, but it also knows that radical developments usually start small. For example when it comes to tedious and time-consuming visits to public authority offices. These will soon be a thing of the past when a modern, digital citizens’ service is established. Another similar example is improved access to digitized educational content.

Smart transport planning, interlinked online and offline retailing through innovative dispatch systems, the digital transformation of health services, intelligent construction – the focus is always on sustainable change for the benefit of citizens. A large measure of personal initiative is also required. Smart city planning also means seizing, encouraging, and supporting socio-cultural trends such as sharing and collaborative consumption. After all, that is also a part of the future city: “From anonymous selfishness comes a sense of togetherness.” The digital revolution paves the way for these movements to gain ever greater reach. And as a result, urbanity is increasingly shaped by the residents themselves.

The expansion of such developments requires the transparent handling of public data. All optimism for the future aside, the authors also emphasize the difficulties involved in the field of data security. They also engage with other problems that must be solved or overcome. However, in the end, Vogel, Weißer, and Hartmann come to the following visionary conclusion: “With the new technologies at our disposal, it will be possible to enhance the lives of humans, protect the climate and the environment, improve public safety, and achieve equal opportunities and fair access to information.” Arnsberg has set itself the aim of becoming a smart city by 2030 by means of a major joint initiative involving all stakeholders. The first bold steps have already been taken.

The authors:
Hans-Josef Vogel, after passing his second legal state examination, worked in Bonn, Münster, and Dresden, and has been the Town Clerk of Arnsberg since 1993. After being elected to the post of Mayor by the town’s residents in 1999, he was re-elected a further three times. He has been the District President of Arnsberg since 2017.

Karlheinz Weißer is Managing Director of the Arnsberg public utilities. He has edited and authored a number of technical publications and he passes on his knowledge through lectureships at various universities, as well as at management conferences and advanced training courses.

Professor Wolf D. Hartmann is the Scientific Coordinator for the development of the Arnsberg campus. He is a member of the European Academy of the Sciences and co-initiator of the Academy’s Alma Mater Europaea.