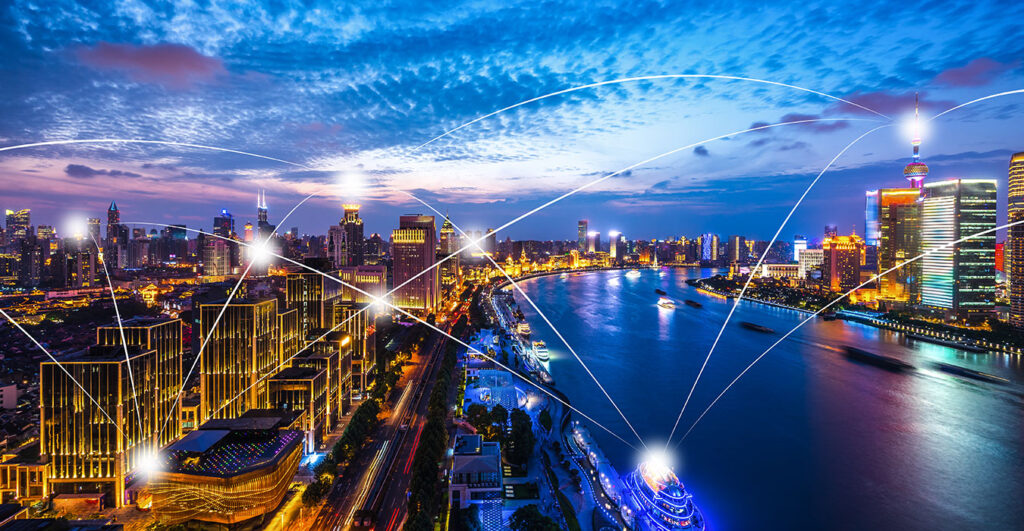 A lakeside city is being built to the northeast of Vienna, set to be a smart city future laboratory and showcase project. In the Spanish city Santander, for example, citizens can report potholes and faulty street lamps via an app. In South Korea, the city of Songdo is about to be completed. The planned city will require around 30 percent less energy than traditional cities thanks to sensors and connectivity. People are working on the smart city concept all over the world. A new study shows how far German towns and cities have come.

In Germany, the smart city trend has been relatively slow to catch on with urban developers. But since 2017, there has been a growing proportion of municipalities that are working on a digital agenda and want to develop into smart cities. The industry association Bitkom has identified 50 pioneering cities in Germany, showing how they approach digitization from a strategic and organizational standpoint and how they involve citizens, partners, and other local players.

The cities mainly want to improve the quality of life and commercial appeal through digitization. These main objectives are divided into sub-goals with their own steps. For instance, several cities are working on ideas to better control traffic flow and help drivers easily search for parking spaces. In Darmstadt, for example, sensors at traffic light junctions record traffic data in order to optimize traffic control, and thereby also reduce emissions. In Ludwigsburg, an app is to be developed that will lead drivers directly to free parking spaces.

Lemgo uses an IoT infrastructure (IoT: Internet of Things) to optimize the city bus network: The networked busses can locate each other and indicate whether their passengers are reaching their connecting busses. An app also allows people to find the current locations of the busses while the busses themselves record the current traffic situation.

In Jena, three prefabricated buildings with a total of 300 apartments are being renovated and digitally updated. For example, the residents can now check the state of the traffic in the city — if there are many traffic jams or if all the parking spaces are full — all without leaving their home. The time that the next tram will depart is also provided along with this information. Talks about telemedicine options are already underway with the nearby university hospital, so that older residents can stay in their own homes for as long as possible. The whole project was awarded a special prize at Germany’s national “Stadt.Land.Digital” [City.Country.Digital] competition in January.

When it comes to health, several cities are participating in the research program “Bringing Technology to the People” from the Federal Ministry of Education and Research, and the associated funding initiative “Zukunft der Pflege” [Future of Care]. Engineers and healthcare professionals are researching new medical care technologies under realistic conditions at an innovation center in Oldenburg. In addition, there are practice centers in Hanover, Freiburg, Berlin, and Nuremberg, where these developments are being used and tested in everyday medical care. Although there are many new technologies that can support medical care – such as automated systems that detect falls and emergencies, or record whether a patient is taking in enough fluids – these have only been rarely used so far. Since their practical viability has not yet been proven, managers in clinics, old people’s homes, and care services are hesitant.

Of course, the digitization of administration also includes self-service options. This enables citizens to initiate or complete numerous procedures that previously required a visit to the town hall. Almost all cities are working on similar projects, which are generally also connected to the automation of business processes. This means that public administration is increasingly dealing with approaches that have been increasing the efficiency of the dialogue between customers and businesses for some time.

The city of Soest, one of the digital model communities in North Rhine-Westphalia along with Aachen, Gelsenkirchen, Paderborn, and Wuppertal, wants to explore new possibilities for assessing road damages. Municipal vehicles will record the damages, which will be analyzed with artificial intelligence.

The city of Duisburg also relies on AI. The technology is intended to make dialog between the citizens and the city administration easier: A chatbot is available to answer questions around the clock. This also lightens the workload for the employees in the service center, who hand over routine tasks to a software robot as well. This should give them more time for individual requests. These concepts have also already proven effective in customer dialog for businesses.