Interview with futurologist Sven Gábor Jánszky: “Digitization is the greatest opportunity ever presented to humankind” 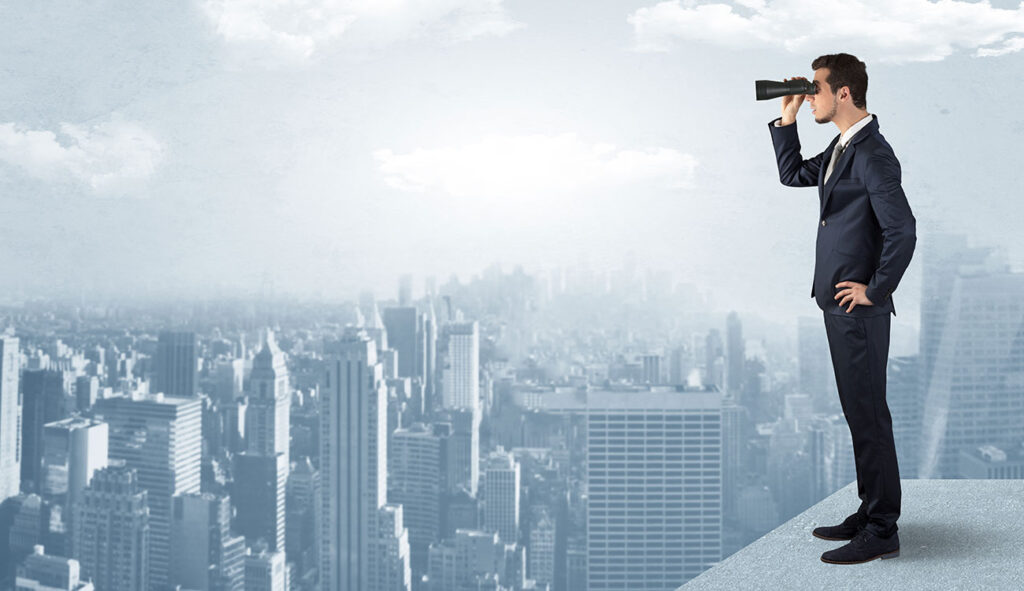 Being able to predict the future has always been one of humanity’s great dreams. Futurologists have set themselves the task of making this dream a reality. But how do modern futurologists work, and how reliable are their forecasts? What future developments can already be foreseen in the way companies communicate with customers, for example? We discussed these and other issues with the futurologist Sven Gábor Jánszky.

How and why did you become a futurologist?

I studied political science and journalism, and then I worked as a journalist at various radio stations for around ten years. That was fun, but I was also frustrated that I could only report on things after everything had actually already happened. I wanted to be there when decisions are made that are important for our future! So first, I organized conferences on the topic of the future, and then I also held workshops and conducted some studies. That’s how my institute gradually came into being: 2b AHEAD ThinkTank. By now, I should add, there are actually degree programs for futurologists.

What is the basis for your work and your forecasts?

Scientific methods. Futurology is a sub-discipline of qualitative social research and it applies two main approaches: the Delphi method and future scenarios. Our work consists primarily of long, in-depth interviews with people who are currently making decisions that have an impact on the future — approximately 1,500 managers and executives overseeing strategy, innovation and technology at large companies that drive markets. We ask them what they are doing at the moment, why they are doing it, and what they think the result will be five or ten years down the road. This gives rise to trend topics and future scenarios, descriptions of everyday life in the future, in other words.

You’ve already had the opportunity to see how accurate your forecasts were a number of times already. Have there been any surprises for you?

The most recent surprise was the presentation of the new Google Assistant at the I/O developer conference. At the user’s request, the Assistant can call up a hairdresser or a restaurant and arrange an appointment or reserve a table. In 2008, I predicted just this sort of software with these capabilities for the mass market in 2020. It was a nice surprise to see that we were so close with regard to the timing.

Other forecasts prove accurate faster than we expect — such as self-driving cars. Of course, there are also developments that take much longer to materialize. In 2008, for example, I predicted that the internet would evolve into a 3D world by 2020. That was based on statements made by the display manufacturers, which indicated that they would, by then, bring out mass-market 3D displays that don’t require glasses. That is clearly yet to happen.

That highlights one of the weaknesses of futurology as a discipline: if the assumptions made by the experts are incorrect, then we’re starting from false premises too, and the forecasts we derive are also wrong.

Let’s talk about other aspects of your work. You’ve established the “Rulebreaker Society,” a network for unorthodox thinkers. Why is it important to break rules?

Because rules are always about preserving the old. And that’s hostile to innovation. If everyone conforms to the old patterns of behavior and the old models, there is no progress. All the great pioneers in the history of humanity have ultimately been rule breakers, people who didn’t accept established rules and who believed that there was a better way.

That idea can be applied to companies too. If entrepreneurs don’t accept the rules of their industry, and break them for the sake of their company and their customers, they upend the market. There are many examples of this, some of them in Germany. Horst Rahe, for instance, the inventor of the AIDA “club ships.” Cruises were originally expensive, elitist and conservative. With AIDA, they became affordable and open to the mass market, and they offered entertainment and events like a club vacation.

Your institute provides support to top-level managers developing new strategies and business models. What sort of things do you tell them?

The basis for our advice is a future scenario that we develop with our client. Among other things, that shows how the client’s industry, customers, business models and competitors are developing, as well as the state of society in general. After that, we work with clients to establish how they are positioned in this future. Then, first, we develop the appropriate strategy to achieve this positioning. Second, we develop the new business models or business ideas to be tested in pilot projects. And the third task is developing the required skills or abilities. For example, how can you get employees on board for this journey and show them that changes are good and offer opportunities? How can you change your own behavior, if necessary?

How well-positioned do you think companies in Germany are for the future — the next ten years, for example?

It’s important to make some distinctions here. There are regions that are moving at a much faster pace than Germany with regard to technological developments. In particular, I’m referring to China and Silicon Valley, which are leading the way by a clear margin. And there are also a few hotspots elsewhere, like Tel Aviv and Singapore. So if we compare technological development in Germany with that of China, our economy doesn’t look that good, to put it diplomatically.

But in every other region, including in Europe and the United States, the pace is generally even slower than in Germany. Ultimately, then, whether you say that Germany has already missed the boat or that it’s doing well as one of the top ten industrial countries in terms of technology depends on your point of view.

What’s changing for companies now in their interactions with customers?

In the past, customer service basically waited until the customer noticed a problem or had a question and got in touch. “Good customer service” meant responding quickly, being prepared to help and conveying a sense of genuine interest.

Now, it’s about collecting as much real-time data as possible from the customer and putting it to use. Real-time data is data that didn’t exist ten minutes ago and will be obsolete again in ten more minutes but is important now, at this instant. It is also data that customers haven’t actively provided themselves: where they are just now, what they need at the moment, what they are looking for, etc. Getting this data requires as many sensors around the customer as possible. A smartphone, for example, generally “knows” with a high degree of precision where it is, which makes it possible to infer the location of the user. To use this data, we need AI-based algorithms that predict what customers need or might like and when — in other words: predictive analytics.

Sensors that have information about me on the one hand, and artificial intelligence on the other hand — where is all of this headed?

In the future, the interaction with customers will no longer take place between people but instead between the personal digital assistant of the customer and the digital assistant of the company. These two bots will compare notes, find the best solution for both sides and carry out the transaction. Over the next ten years, a bot economy will emerge in which these assistants conduct business autonomously on behalf of their users by using their own wallets and a specified set of rules.

Let’s return to the present. When do you feel well looked after, as a customer?

When the customer support specialist tries to sympathize and see things from my perspective. I travel a lot for work, for example. I fly often, and I like to book my flights through the service hotline. The service people that I really like are the ones who see from my profile that there are certain routes where I prefer to fly economy class and certain ones where I prefer business class. They also deduce or infer that I have a wife and children, and they don’t offer me any flights with an overnight layover or over the weekend. And it’s true, I wouldn’t use those connections because I want to see my wife in the evening and my kids in the morning.

Would it matter to you whether a bot or a person is providing that service?

No. But I don’t believe that a company’s bot can be so intelligent that I’d like to talk to it. So there will be personal assistants to carry out this transaction. You can speak to them, and they know their users well enough to do that.

What is your personal attitude to digitization?

Digitization, as I understand it, is the development of artificial intelligence that is far better than human beings at making forecasts, analyses or strategies. Digitization makes the world more intelligent. Today, it has human intelligence; in the future, it will have superhuman intelligence. And that gives us the opportunity to make the world truly better for our children.

What do you mean?

I mean that we will finally be able to solve some of the big problems that defied solution in the past, such as ensuring adequate supplies of food, water and energy in every part of the world. Let’s take the supply of drinking water, for example. The necessary technology — desalination plants — has been around for a long time. But it’s energy-intensive and therefore expensive. Digitization will lead to higher energy production from solar collectors on the Earth and in low Earth orbit, something NASA is already working on. There will then be more than enough energy to operate these desalination plants everywhere at low costs. That is why digitization is, in my view, the greatest opportunity ever presented to humankind.

Sven Gábor Jánszky (b. 1973) is a futurologist and chairman of the “2b AHEAD ThinkTank,” Europe’s largest futurology institute. Every year, under his direction, 300 European CEOs and innovation officers draw up future scenarios and strategy recommendations for the next ten years, an exercise that began 17 years ago.

With his management strategy book Rulebreaker, he became a spokesman for unorthodox thinkers and disruptive innovators in the German business world. He is also the author of several books on trends: 2020, 2025, 2030, Das Recruiting Dilemma and Die Neuvermessung der Werte.