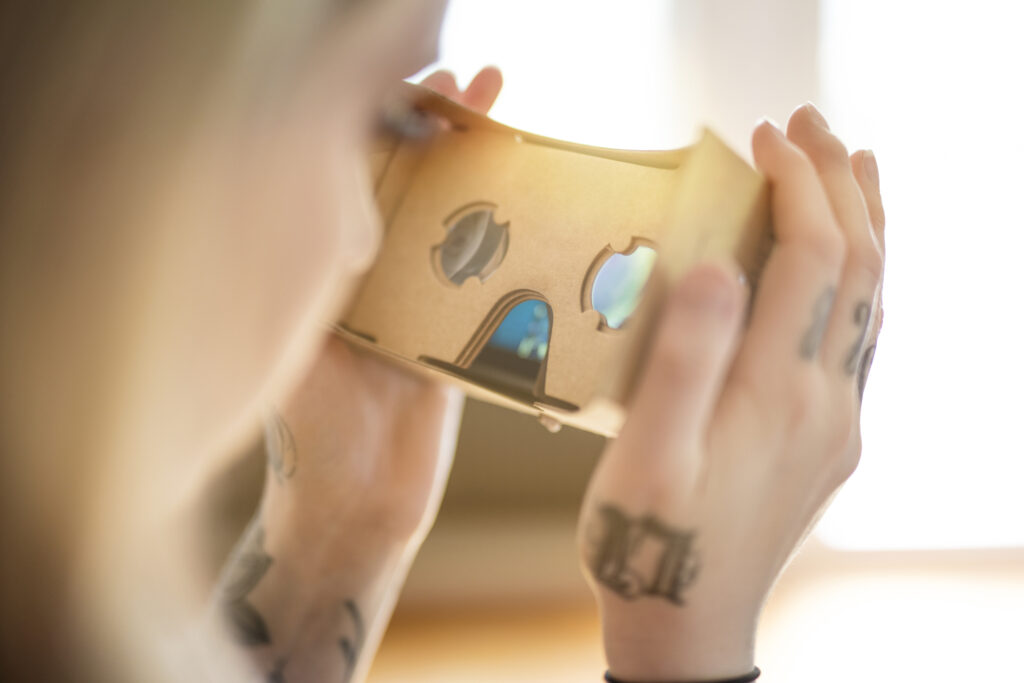 Virtual and augmented reality will soon be much more than fancy gadgets for gamers. This imagined and enhanced view of reality could open up completely new perspectives for customer service in the near future. As of today, four possible applications are conceivable.

As the agenda at the recent CeBIT trade fair in Hanover once again made clear, virtual reality (VR) and augmented reality (AR) are all the rage. But the two terms are often incorrectly used interchangeably. While VR immerses its users in a whole new world, AR changes the world around the user. One specific example clarifies the difference here: Someone building their own house can use VR to tour their future home using plans provided by an architect before a single brick has been laid. If the house is already finished, the owner can use AR to see how their currently empty living room would look with wallpaper or furniture. If they use Microsoft’s HoloLens AR glasses instead of their smartphone, they can even walk around a virtual table and take a look at it from every angle. The HoloLens screens are transparent, so interactive 3D projections can be integrated into the surroundings. Although this technology is still too expensive to establish itself as the current standard, this example highlights the potential this technology already holds for the customer service sector.

VR and AR in Action

Four possible customer service applications for VR and AR are currently on the horizon:
1. VR can be used to educate and train customer support representatives, especially in the technical sector. This will allow trainees to virtually touch objects and parts with corresponding gloves, enabling them to practice repairs anywhere, any time. But it will still be a few years until this technology is fully developed. And VR glasses and gloves aren’t all that is needed. The right content will be needed to go along with the technology. After all, routers, splitters and telephones, for example, can only be examined or networked virtually if 3D models are available for all of their components.

2. AR will change and enhance customer support representatives’ workspaces. It’s conceivable that, in the future, representatives will be able to use their AR glasses to access numerous user interfaces and information and activate them instantly or push them to the background with hand gestures. Like a conductor, representatives would control and make use of various virtual screens and databases with a simple swiping motion.

3. VR and AR will be an enormous help to end customers, for example when switching out the hard drive on a gaming console. A VR video can show them the steps needed to do so. And things will only get more convenient with AR: It will demonstrate the steps to be taken directly on a live image of the device, including color-coded labels for the parts to be removed or replaced. This will require products to be laid out in a corresponding way. A pair of AR glasses or an app needs optic markers or colors not visible to the human eye to process information. The principle works similarly to a QR code. Hewlett-Packard presented an AR app back in 2013 that helped customers switch out a printer cartridge. German automotive manufacturer VW also uses AR to help mechanics service their small-series model XL1, a plug-in hybrid. The advantage: The instructions on what needs to be done are directly linked with the information regarding where and how things are to be done.

4. VR and AR will be used to give end customers a better idea of products and their benefits prior to purchase. This is especially useful for highly complex products or products that rely heavily on design. The reality conveyed using VR or AR is much better at presenting the product than is possible with a website. The first examples of this kind of technology are already cropping up, but are primarily being used for marketing individual products.

Dive into the Virtual World – But When?
VR and AR are opening up completely new prospects for companies, their customer support representatives and their customers. Although the costs currently remain quite high and there is a distinct lack of benchmarks at the moment, now is the time to start considering application scenarios and how to put these into practice in customer service. Companies should start out with small pilot projects to gain experience. After all, it’s not a question of whether VR and AR will become indispensable, but when.