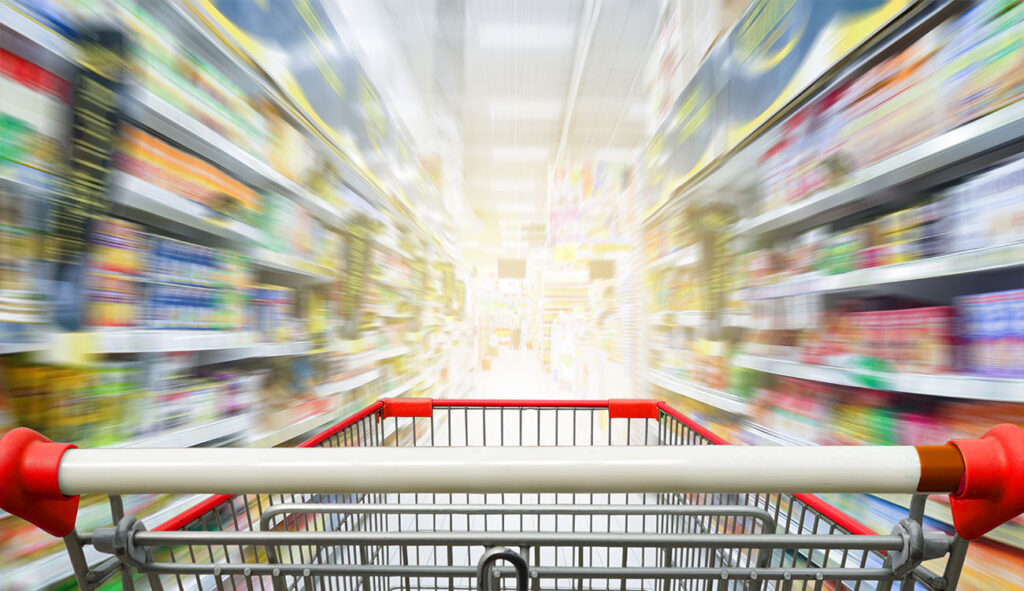 It’s a familiar scene for anyone doing their grocery shopping: overcrowded checkouts, slow-moving queues, and frustrating fumbling for loose change make for a stressful start to the evening or weekend. Amazon has now embraced the challenge, opening its own grocery store in January. What makes it any different? There are no checkouts anywhere.

The app “Amazon Go” makes many things possible. Simply download it onto your smartphone, make an Amazon account, and you are free to explore the 1,800-square foot mini-market. The store is located at the company headquarters in Seattle and offers a wide range of products: from fresh staples like bread and milk, to ready meals and meal kits, to snack and drinks, the shelves are filled with an array of grocery essentials. As soon as you enter the store, a complex system of cameras and scales individually records your shopping. And, as Amazon emphasizes, all without facial recognition – people are only recognized as “3D objects.”

The shelves are equipped with sensitive scales. Along with the hundreds of small cameras installed throughout the store, they record exactly which customers take which products from the shelves and put them in their shopping cart. Once you have picked up everything you want, the biggest plus of the new supermarket is revealed. Instead of standing in the queue as usual, you just check out with the app again. To do this, you hold your smartphone to a barrier – in the same way you entered the store. Amazon calls this “just grab and go” on their website. Everything will be automatically charged to your Amazon account later. The purchase price will be completely refunded if you find any faults or defects in your goods. What at first sounds like an invitation for shoplifting is, in fact, a highly sensitive and accurate system that can not be tricked as easily as it seems, a New York Times reporter has discovered. To test the program, he tried to wrap a shopping bag around a few soda cans while they were still on the shelf and smuggle them out of the store. It wasn’t long before the cost was charged to his account.

It doesn’t work without people

The “Amazon-Go” shop can’t survive completely without staff: A number of employees make sure the shelves are stocked, meals are freshly prepared, and the customers are given a warm welcome. Also, anyone wanting to buy alcohol must show their ID to staff member. So far, just to test the concept, the customers have only been company employees and media representatives. Once the store is opened to the general public, things will really get interesting. No one yet knows how the system will work with large crowds of people. For example, it could cause problems when customers who look very alike or are wearing a similar outfit enter the store. But Amazon is confident that constant training of the artificial intelligence behind the system will maintain an extremely low error rate.

The problem of data protection

Training that requires a lot of input. Data protectors are skeptical about the concept and, in Germany, there are still many concerns about these sorts of projects. “Personal data is collected,” said the spokesman for the German Press Agency’s State Commissioner for Data Protection for German state North Rhine-Westphalia. In North Rhine-Westphalia, this is only possible with the customer’s consent – and only because of the highest possible level of transparency in the data collection. Moreover, the spokesman for the Consumer Association of North Rhine-Westphalia, Georg Tryba, points out to German newspaper die WELT that doing away with cashiers also means losing an important control step for the consumer. Of course, smart shopping concepts will also be trialed in Germany. “It will be a bit of an innovation race,” says Tryba.

In the US, Amazon has already started to take the lead in the race. Their first supermarket is another step towards brick-and-mortar stores – so far, the company operates several bookstores in the US. The expansion from the web into the analog retail world with “Amazon Go” has been an important step toward the future.