The insurance market is highly complex and often opaque. This is especially obvious to customers who want to take out insurance with as little fuss as possible. Things could soon change for them. The e-commerce company Amazon wants to shake up the market as a new player.

The online giant from Seattle evolved long ago from an Internet bookseller to a provider of widely distributed goods and services. In Germany it was most recently interested in the pharmacy market and food industry. Up to now, the e-commerce company has only offered insurance in the form of product-related policies: users who buy an electronic product, for instance, can purchase the corresponding protection right away. This is made possible for Amazon by insurance industry partners like Ergo or the British London General and has not caused much stir in the boardrooms of major insurance companies. But that could soon change. The industry woke up once the online giant began looking in industry networks like LinkedIn for insurance experts who “want to participate in the start of a new company.” Amazon has apparently planned nothing less than to “disruptively change how policies are bought and sold.”

Amazon may have the advantage

Is there a small revolution looming? Amazon has clearly defined its seriousness about its big goal: “We have ambitious plans for significant growth in our existing markets and will bring new, innovative products to market.” There are many indications that this could be work, including the fact that the company possesses an above-average amount of accurate customer data, purchasing habits and domestic circumstances. A classic insurance agent first has to work laboriously to obtain this information. In addition, trust in the online retailer is high and its experience with uncomplicated purchase transactions is a real plus. Transparency and infrastructure also work in favor of Amazon, as Patricia Davies, insurance analyst at the London-based analysis company GlobalData, told Süddeutsche Zeitung: “Amazon offers clear, transparent services like the ability to track a package, One-Day Delivery, a clear return policy and product reviews.” Therefore, Amazon’s move into the insurance market could therefore pose a real danger to traditional providers. “This will be a serious threat,” Davies says.

The focus: digitizing the customer journey

This is likely to be only the beginning. In the long term it will be about more than just selling policies. In the insurance industry, too, the digitization of customer journeys is increasingly becoming the focus of providers. The array of competitors for traditional insurance agents ranges from apps that allow easy handling of claims and advanced automation using artificial intelligence to communication with chatbots and video chats. The industry has recognized this as well. Allianz CEO Oliver Bäte recently stated: “Of course, we need considerably more innovation. The problem with many established companies is culture. There are few so-called digital natives in the executive suites.” After a phase of getting accustomed to the idea, the large companies have finally agreed to accept insurtech start-ups as partners. But with the upcoming entry of Amazon into the market on a major scale they now are being confronted with a real culture shock.

Insurance in the shopping cart

Whether the venture will succeed remains to be seen – because there are also still many unanswered questions. For example, it is unclear how Amazon wants to offer the overwhelming flood of conditions in complicated insurance policies in as user-friendly a way as possible without also restricting the minimalist shopping experience. The multitude of different conditions on the various international markets is also likely to pose a tricky problem. However, if the online giant manages to overcome these steep hurdles, then homeowners and liability insurance could soon join best-selling books, Band-Aids and bread in the shopping cart. 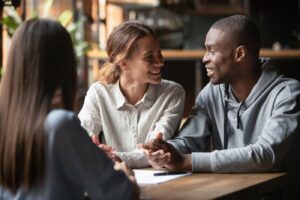