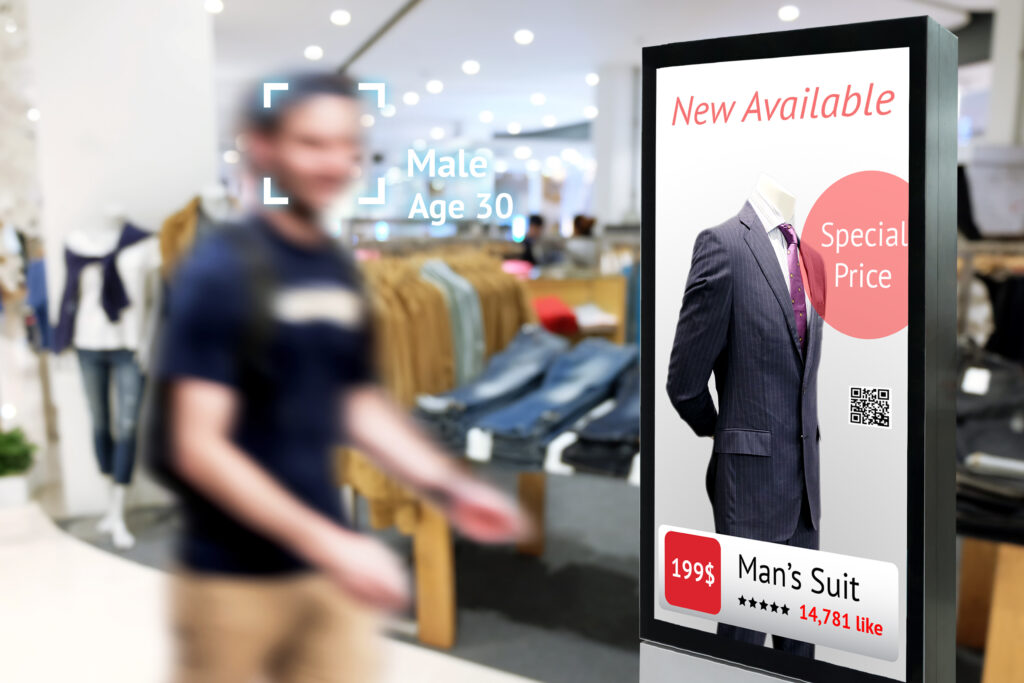 Coughing advertising
Advertising pillars and the traditional billboard are a thing of the past. Today, outdoor advertising surprises and excites with electronic advertisement and information systems. But soon the digital posters will be able to do even more. All because of artificial intelligence.

The marketing department of the Swedish pharmacy chain Hjärtat thought of something rather ingenious in December 2016 to help motivate smokers to finally kick their habit. They developed an advertising poster that coughed whenever a smoker approached. The pharmacy rented big digital advertising spaces in Stockholm for this. Instead of displaying repulsive shock images like on cigarette packets, the advertisement simply featured a man. Non-smokers walking past had nothing to fear. But anyone walking past while smoking received a little surprise. Why? The man on the poster turned aside and began to cough loudly. Then came the terse sentence: “We are the Hjärtat pharmacy. It’s our mission to help you to live longer and healthier.” The targeted smokers were either stunned or amused. The billboard campaign impacted everyone who saw it. The technology behind it is relatively simple: A video sequence was played on a large LED screen, and smokers walking by were identified by a smoke detector. This campaign shows a trend in digital outdoor advertising. In the future, it will increasingly respond and adapt to the behavior and needs of potential customers.

Almost unlimited opportunities to reach out to customers

An advertising poster could respond to weather data and advertise sunscreen if the temperature rises above 77 degrees Fahrenheit. It will become even more individualized if specific customer groups can be identified based on personal parameters. A recent test in Japan opened up a new world of advertisement. A consortium of five big advertising and IT companies, including Intel, made use of an outside advertising space on an urban motorway in Tokyo. A camera surveilled all vehicles within a distance of 800 meters. Recognition software analyzed all trackable data – from the brand of car to the speed. A corresponding advertisement was then displayed on the screen for five seconds in each case, customized for the individual driver. People driving in old mid-class Toyotas were shown the new model in an appealing light. An truck driver transporting goods on the motorway at night was shown an advertisement for an energy drink. A crazy marketing idea? Quite the opposite! With the help of artificial intelligence, digital outdoor advertising offers unlimited opportunities to make customers aware of products and services. Car brands, for example, can help advertisers draw conclusions on a person’s income, status, living situation and needs. Like any other marketing tool, the intelligent electronic poster should be part of the complete customer journey and interwoven with all channels. Sensape, a company based in Leipzig, is currently working on this. The company is currently developing intelligent digital signage with real-time personalization, which, in the background, analyzes the demographic data and emotions of the users with the advertised products, helping advertisers draw new conclusions on the target group and offering strategies for addressing the customer during the customer journey. This intelligent digital signage solution is still in an experimental phase. As soon as it becomes part of everyday life, the number of advertisements customers find “annoying” will drop.